"This is to inform you that, after an extensive consideration, in view of the fact that the parties have not paid the long outstanding bills, pursuant to R-54 of the Commercial Rules, the arbitrator has decided to suspend further activity on this matter. The parties shall provide immediate full payment of all the outstanding balance and - in any event by no later - than Friday, May 31. 2013

On May 29, the AAA issued a new letter updating the total fees required to be paid by the parties and an extension was given to June 10, 2013. CDR is unable to pay these fees and has informed the AAA of this fact.  If the Arbitration is to continue GBGD will have to pay CDR's share or the Arbitrator will have to change his mind and proceed without payment from CDR.

OTHER NEWS
CDR's President, Mr. Bill Mavridis, has posted a blog post exposing that GBGD has mistated its mining volume at its Toukhmanuk Gold Mine in Armenia by 104%. It appears that GBGD has a double filing system, one to show to the officials in the Republic of Armenia and one that it files in its audited financial statements. GBGD’s material misrepresentations and omissions in SEC filings and public statements have occurred from 2006 to 2012.


The full blog is posted below and can also be accessed at:  http://gbgd-armenia-mining.blogspot.ca/2013/05/global-gold-corp-gbgd-overstates-mining.html

BLOG
I recently received copies of a letter including a summary of production reports filed by MEGO-GOLD LLC, a Global Gold subsidiary for production at the TOUKHMANUK GOLD MINE in Armenia.

The letter was issued by the Chief of Staff of the Minister of Energy and Natural Resources, Mr. Karen Kagramanyan, (MENR) following an access to information request by Mr. Arthur Grigoryan, the President of  “ECOLOGICAL RIGHT", an Armenian Environmental NGO.

I have compiled the data and have compared it with the mining volumes published by GBGD in its December 31, 2012 annual 10-K report. The report is signed by Mr. Van Z. Krikorian as CEO and the rest of the Board of Directors and audited by RBSM LLP of New York.

Since 2006, GLOBAL GOLD CORP (otcqb: GBGD) has overstated its mining volume by 104% from its Toukhmanuk Gold Mine located in Armenia.

In the 10-K report, as filed with the United States Securities and Exchange Commission (SEC), for the year ending December 31, 2012,  Mr. Krikorian and his board certified the following statement:

The production records filed by Global Gold in Armenia paint a different story. Below is the translation of the table received from the MENR. This table is drawn from the official reports of production at the TOUKHMANUK GOLD MINE filed by MEGO-GOLD, since 2006. 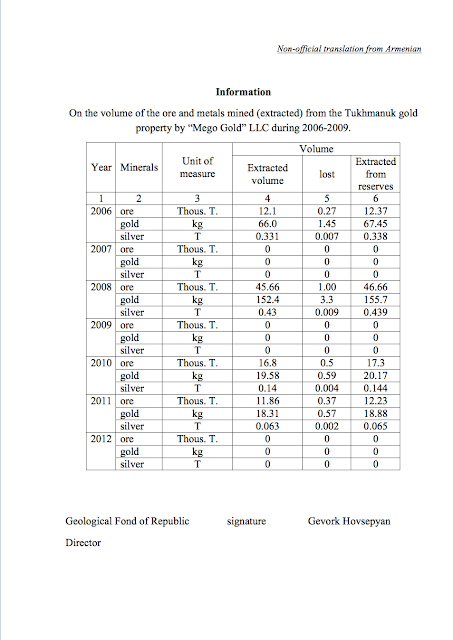 Converting the GBGD data to conform to the Table provided by the MENR we see a different picture emerging. 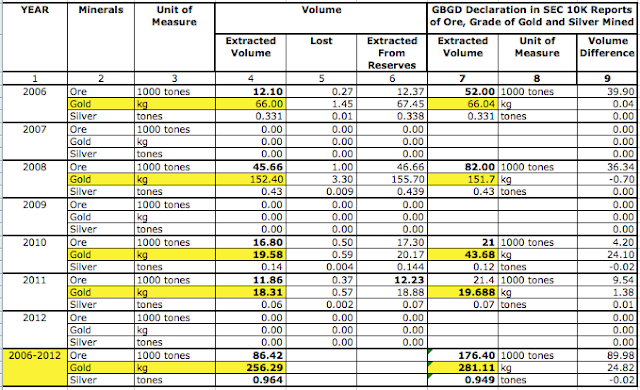 Converting the Armenian data to conform to the GBGD data published in its 10-K we get the following table: 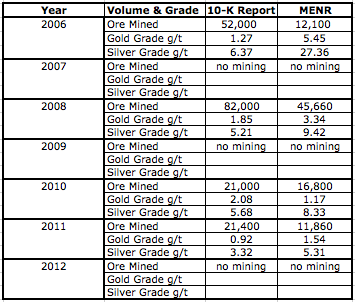 No investor can now TRUST what the real grade of the TOUKHMANUK Gold Mine is.  Global Gold reports one grade with the MENR and a different grade in their audited financial statements filed with the SEC. This is a huge problem for Global Gold since investors rely on published grades to evaluate the value of gold assets. Have investor's in Global Gold been misled?

There clearly has to be an investigation by the SEC, PCAOB and the MENR to find out what the real truth is.